Day 03 / Delhi – Samode
After breakfast, drive from Delhi to Samode and stay at its palace or garden retreat. The village’s settlement is picturesque. Night stay in Samode.

Day 04 / Samode – Nawalgarh
After breakfast, drive to Nawalgarh in the heart of the Shekhawati region, later in the afternoon explore surrounding towns and villages with their painted havelis and temples. Night stay in Nawalgarh.

Day 05 / Nawalgarh – Khimsar
After breakfast, drive to Khimsar, Khimsar perched on the edge of the Great Thar Desert in the heart of virgin India lies a unique 16th Century fort. The fort was originally built as protection, was later used by the royal family as the residence in the 18th century. Originally, the fort walls, turrets and stables were built solely for war, and were constructed around the beginning of the 16th Century. Back to the hotel, Night stay in Khimsar.

Day 06 / Khimsar – Jaisalmer
After breakfast drive to Jaisalmer, arrive and proceed for SAM approx 35 kms. outside Jaisalmer. Arrive at SAM at Jaisalmercamel riding point. You will be provided camel ride till sunset point. After viewing the sunset proceed for Swiss tent by camel ride. Arrive Swiss tent and check-in. late evening enjoys folk dances, Rajasthani music, and campfire along with the dinner. Night stay in Jaisalmer.

Day 07 / Jaisalmer – Pokaran
After breakfast spend time walking around Jaisalmer . Cut off from civilization for centuries, this is one of the last known citadels where the 21st century has made few intrusions, and a wide variety of crafts are still practice, later in the aternoon drive to Pokaran. Pottery , and decorations for camels are made here. Night stay in Hotel.

Day 10 / Jodhpur – Daspan Village – Jodhpur
After breakfast drive to Daspan village where the fertile field grow bountiful crops and the village is known for its embroidered shoes. There is also some families that make bows and arrows in the Bhil style. Night stay in Jodhpur.

Day 12 / Ranakpur – Devgarh
After breakfast drive to Devgarh . Spend evening at the lakeside farmhouse of a local chieftain. Night stay in Devgarh.

Day 13 / Devgarh – Udaipur
After breakfast Drive to Udaipur, later proceed for sightseeing. Udaipur is built in 1559 A.D. by Maharaja Udai Singh, the city has been described as the most romantic spot on the continent of India by Col. James Todd. Visit the City Palace museum, the Jagdish temple, Sahelion Ki Bari ( Queen’s resort for their friends) Bhartiya Lok Kala Mandir ( Folk art museum) and the Pratap Memorial. Night stay in Udaipur.

Day 14 / Udaipur – Dungarpur
After breakfast Drive to Dungarpur with its Bhil Villages all around. Night stay in Hotel/ Resort.

Day 15 / Dungarpur – Chittaurgarh
After breakfast drive via Chittaurgarh fort to Bijaipur, the base for the Mina tribes. The Villages is located beside a lake. Night stay in Hotel/ Resort.

Day 16 / Chittaurgarh – Bundi
After breakfast drive to Bundi for sightseeing of fort, and Raniji ki Baori step well, continue to Rajmahal, a 300 years-old Palace with the village named after it. The palace overlooks the river below. Night stay in Bundi.

Day 18 / Pachewar – Jaipur
After breakfast drive to Jaipur, arrive and proceed for local sightseeing. Visit the City Palace, Palace of Winds also known as Hawa Mahal, this elaborate building, now little more than a façade, is encrusted with delicate screen sand carved balconies from which the royal ladies, confined to their quarters, could sneak views of the outside world. Past, present and future merge at Jai Singh’s observatory, where time has been accurately measured since the 17th century. Night stay in Jaipur.

Day 19 / Jaipur – Bhandarej
After breakfast drive to Bhandarej. The village has a lovely setting beside a lake, and Mina settlements around it. Night stay in Bhandarej.

Day 20 / Bhandarej – Karauli
After breakfast drive to Karauli, know for its pink stone quarries, and the Kaila Devi Temple. Night stay in Karauli.

Be the first to review “Enchanting Rajasthan Tour” Cancel reply 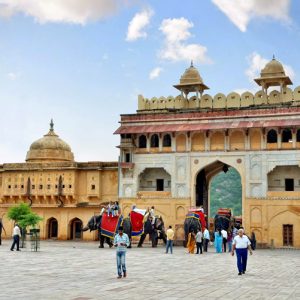 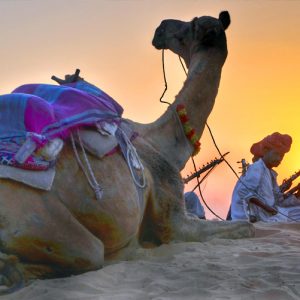 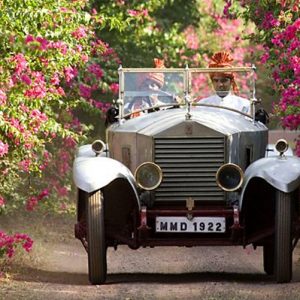 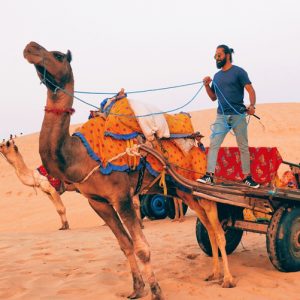 Romance Of The Desert